Human perception of hand position is multisensory. The brain can estimate it visually, from an image on the retina, and proprioceptively, from receptors in the joints and muscles. The sensory inputs determining these percepts are subject to changes in environmental factors (e.g., lighting) and internal factors (e.g., movement history). Multisensory integration of visual and proprioceptive estimates gives us flexibility to cope with such changes. For example, washing dishes with the hands immersed in water creates a spatial misalignment between vision and proprioception, as water refracts light. The brain resolves this conflict by realigning visual and/or proprioceptive estimates of hand position. Such perceptual learning can alter perceived hand position, but it is unclear how movements planned with that hand are affected. Multisensory and motor processing have largely been examined separately, limiting our understanding of how these systems interact.

Our research focus is visual and proprioceptive control of upper limb movement. Specifically, we are interested in:

1. The neurophysiological basis of visuo-proprioceptive realignment and its impact on motor control 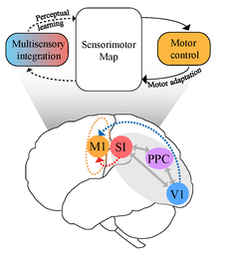 We are interested in whether changes in multisensory integration and motor control affect a common sensorimotor map at the behavioral or neural level, or whether the effects of multisensory learning are confined to the perceptual domain.
To accurately represent the processes underlying sensorimotor behavior and learning, we must understand how changes in multisensory integration affect the motor system, and vice versa. A fundamental concept in motor control is the sensorimotor map, relating motor commands to sensory consequences. Motor learning is thought to modify such maps, but the role of perceptual learning (such as visuo-proprioceptive realignment) is unknown. If visuo-proprioceptive realignment affects perceived hand position in a common sensorimotor map, and thus motor planning with that hand, it may be possible to detect neurophysiological changes in the motor system after perceptual learning. We are currently focusing on primary motor cortex (M1), as it is most directly connected to motor control and execution, of the cortical motor areas. It has also been linked to motor learning and has somatosensory response properties.

2. The role of "sensory" and "motor" brain regions in sensory vs. motor learning processes.

Schematic illustrations of difference between resting state scans pre-to-post baseline and pre-to-post learning (visuo-proprioceptive realignment). Greatest learning-related increase in resting state functional connectivity occurred between SI (somatosensory cortex) and PMv (ventral premotor cortex). CB: cerebellum. M1: primary motor cortex. aSPL: anterior superior parietal lobule.
It is well known that motor areas such as primary motor cortex (M1) and cerebellum are critical for motor adaptation, a form of motor learning involving trial-and-error practice. However, recent studies suggest motor adaptation is associated with realignment of limb position sense (proprioception) along with changes in somatosensory cortex (SI). This suggests that activity in, or connections with, sensory areas are important for motor learning. In addition, the our work indicates that M1 excitability is altered after visuo-proprioceptive realignment, a type of multisensory learning, even after controlling for motor behavior. This suggests that motor regions may play a role in sensory learning.

Our objective is to identify the roles of sensory vs. motor brain systems in sensory vs. motor learning, focusing on visuo-proprioceptive processing, the multisensory context most relevant to upper limb behavior. Based on ours and others’ work, we hypothesize fully reciprocal interactions between sensory and motor processing, where brain areas traditionally considered “sensory” or “motor” actually play a role in both types of learning. We will test this central hypothesis with two complementary approaches: continuous theta burst transcranial magnetic stimulation (cTBS), which safely reduces activity in a focal area of the brain, to infer the causal role of activity within sensory and motor brain areas, and resting state functional connectivity (fMRI) to identify changes in specific functional connections between these brain areas.

Sensory perception is vital for hand movement, and learning in both sensory and motor systems of the brain helps keep hand control smooth and accurate. Interactions between sensory and motor systems are not well understood, and this project will systematically test a new framework for understanding sensory-motor interaction in hand control. Findings may enable advances in basic and clinical research areas that depend on mechanistic knowledge of sensorimotor function.
Supported by grant R01 NS112367 from the National Institutes of Health